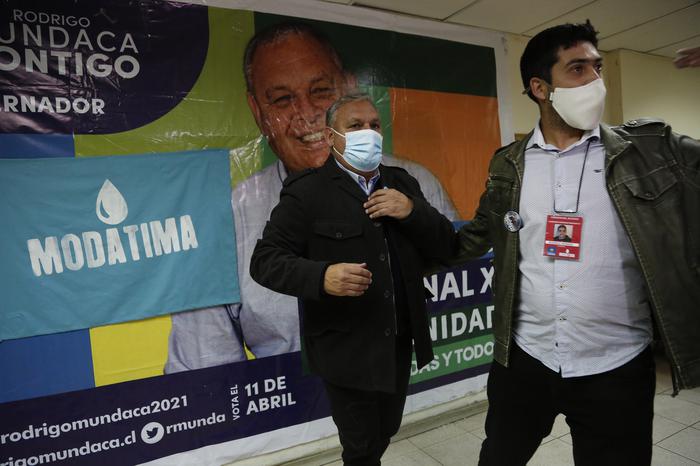 With a total of 293,593 votes and 43.67% of the preferences, this Sunday, for the first time in the country's history, the new governor of the Valparaíso Region was elected: Rodrigo Mundaca Cabrera (60), national spokesman for the Movement of Defense of the Water, the Earth and the Protection of the Environment (Modatima).

From the province of Petorca, Mundaca (independent, Broad Front pact) has defended the right to water for more than a decade. His fight earned him the 2018 Nuremberg International Human Rights Prize (Germany) and, in 2019, the Danielle Mitterrand Prize (France).

The activist prevailed over Manuel Millones, former regional councilor (independent, Chile Vamos pact), who obtained 23.75 % of the votes. And also to the candidate of the Constituent Unit list, the former rector of the University of Valparaíso Aldo Valle, who obtained 20.01% of the votes.

The other candidates: Marco Oyanedel (Equality for Chile), Ricardo Georges (Humanize Chile) and Luis Aravena (Patriotic Union) took 6.38, 4.09 and 2.09% of the preferences.

At 7:00 p.m., in the Mundaca headquarters -which was installed in the regional headquarters of the Teachers College- the smiles of the team were already glimpsed with the scrutiny of the first tables in San Antonio, where by mistake they first began to review the votes for governors.

During the campaign, the agricultural engineer from La Ligua had to overcome various difficulties. “It was a difficult campaign, as a result of the pandemic, which restricted movement,” he explained. Everything was financed with a credit, which he requested in a personal capacity. He had no contributions from parties or corporations. That, he assures him, fills them with pride.

The vote in the Valparaíso Region, and the activist's victory, represents “a merit of Rodrigo Mundaca and Modatima. But he also talks about how the FA has to work with social movements, without a logic of co-optation, but of respect and autonomy, reciprocally. It is an apprenticeship for the political parties”, said Senator Juan Ignacio Latorre (RD).

The analyst Javiera Arce agrees: the victory in Mundaca "is not a victory for the FA, but for the social movements." At the same time, she adds the master's degree in Political Science, it is "a tragedy for the right."

Senator Francisco Chahuán (RN) maintained, on Saturday, his high expectations regarding Millones' candidacy. Internal surveys of Chile Vamos predicted -according to the parliamentarian- a good result. Something similar was raised by another deputy from the conglomerate, who said that if Millones did not go to the second round, it would be a worrying sign for the official presidential projection.

At the regional level, Chile Vamos had increased its preferences, from the 2016 municipal election (with 24%) to the 2017 parliamentary election (with 38%). On this occasion, "the low approval of the government weighed as an anchor for the candidacy of Millions," explains the academic from the University of Valparaíso.

Instead, Mundaca was “powerful in social networks. His campaign was attractive and dynamic. With young people behind and with a better positioning of topics. Greater coherence between political identity and what is finally communicated”, adds the PUCV academic.

The comments in this section are exclusively for subscribers. Sign up here.